The Landmark Inn stands above an ancient crossing on the Medina River, where clear shallow waters flow over a solid bed of limestone. On September 3, 1844, Empresario Henri Castro led a few dozen mostly Alsatian colonists across the river here and went on to establish the town of Castroville on the bluff above. In the following decades, thousands more would arrive along the same road from San Antonio, whether they planned to settle nearby or head farther west to places like Eagle Pass or El Paso.

Caesar Monod, a merchant who emigrated from Switzerland in the 1830s, bought a town lot here from Castro in 1849, where he established a store and tavern with a detached kitchen. He also purchased an adjacent lot with a small house from Michel Simon, an Alsatian farmer who arrived with Castro in 1844. By 1852, Monod had not only established a prosperous stand on the busy road but had also been elected mayor of Castroville. The next year he sold the entire property to an associate, John Vance, for more than ten times what he originally paid for it.

Vance and his two older brothers, all immigrants from Ireland, had already established a thriving mercantile store in San Antonio. Still, this new store located on a significant westward route provided him with a lucrative opportunity to expand the family business. Together with his wife Rowena, a schoolteacher from Vermont, he enlarged Monod’s small store, freed up space for overnight lodging, and converted Simon’s small dwelling into a wash house. In 1859, he built a comfortable home for his growing family overlooking the river crossing. According to the 1860 census, he was the wealthiest resident of Castroville by far, having more than five times the wealth of his closest rival.

Thousands of travelers would pass along the busy road in front of the Vance house and store, headed both east and west. These travelers, along with local Alsatians, Germans, and Tejanos, found a wide variety of goods for sale in his store, which also served as the Castroville post office for many years. The business was going so well that Vance added a second story to his hotel in 1874 to accommodate more guests. Unfortunately, a new railroad bypassed the town in the early 1880s, bringing about a slow decline in business for many years. The Vance family relocated to San Antonio and sold the property in 1899.

Soon after John Vance arrived in Castroville in 1853, he sold the lower portion of his two town lots along the river to George Louis Haass and Laurent Quintle, who quickly built a Gristmill with an attached cotton gin. To harness water power, they built a dam made of limestone and cypress across the river, just upstream from the crossing. The water behind the dam was diverted downhill through an underground raceway to the mill, where it flowed swiftly underneath a large water wheel that powered the machinery.

The Alsatian-born Joseph Courand, Sr., a farmer, teacher, and local official, bought the mill in 1876 and made considerable improvements. The enhanced mill complex included new equipment for processing wheat and lumber. As a result, the mill could then process all four of the significant local products: corn, cotton, wheat, and lumber. After his father died in 1879, Joseph Courand, Jr. continued to operate the busy mill, the industrial center of Castroville, as well as a prosperous store on the town square. In 1899, he purchased the Vance family’s hotel, store, and house, and converted the latter to a warehouse for the mill. By the 1920s, the Courands, now living in San Antonio, was ready to sell the property.

In 1925, Jordan T. Lawler, a New Orleans native with a new vision for the mill, purchased the entire property from Courand. Lawler converted the mill into a hydroelectric plant and ran power lines throughout Castroville, providing the town with its first electricity. He also offered residents running water from his new waterworks. In 1936 he sold the mill property, but he regained it in 1948 by trading his waterworks for it. By then, the city of Castroville could provide water and electricity from other sources, so Lawler retired, and the mill never operated again.

Jordan’s sister, Ruth C. Lawler, also moved to Castroville with her brother in 1927 and contributed to its rebirth of the property in her ways. During World War II, she recognized a need for lodging among the families of servicemen stationed nearby, so in 1942 she re-opened the old Vance Hotel, but instead christened it the “Landmark Inn.” With the construction of the US 90 conveniently adjacent to the inn, it became a tourist destination in the automobile age. A tireless promoter of her property and its rich history, she secured a place for it on the National Register of Historic Places in 1972. Two years later, she donated it to the state, under the stewardship of the Texas Parks and Wildlife Department. In 2008, the Texas Historical Commission took over management of the property and began planning for the preservation work that was completed in 2015. 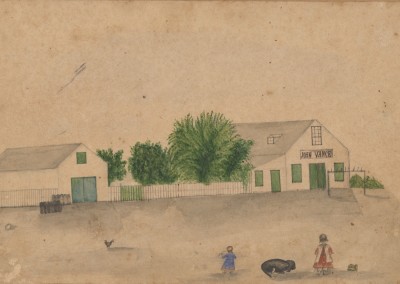 John Vance’s store in the 1850s, painted by his wife Rowena.
(Courtesy of the Vance family descendants.) 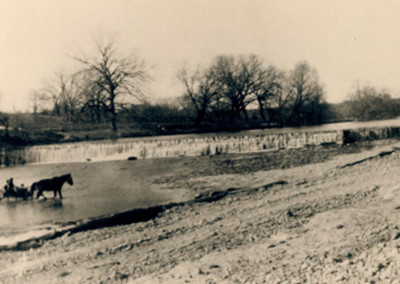 Medina River crossing and dam before 1903. 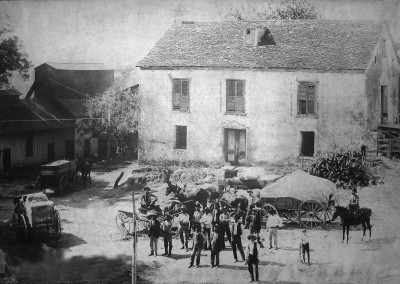 The Vance House serving as a warehouse for the adjacent Gristmill,
circa 1904. 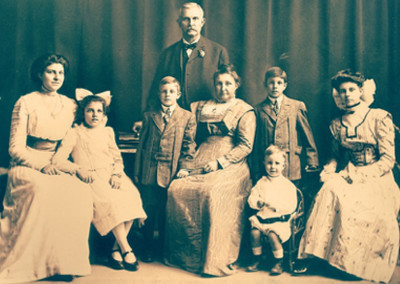 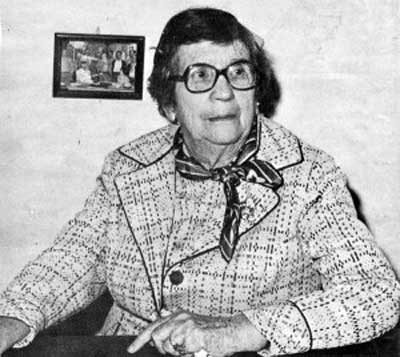